A panel of a comic is like a small snapshot of time with a frame around a specific action, place, and character. Most often the panel is a container—and nothing more—it contains the readers view. The artist uses what is in the frame to control the emotional response of the reader. One way this can be used is how the panel frames a Character’s Figure. This section will explain the different ways you can describe a Character as they are presented within the frame of a panel.

There are many different ways to show a character’s figure within a panel. The following breaks down how to describe the more common Character figures: 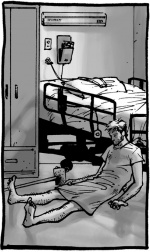 In the mid-ground, Rick is visible in full figure as he sits slumped on the floor, with his back against the side of the bed

Pull in to a wide view of Rick and the horse, visible in full, as they ride from the left to the right of the panel. 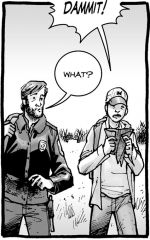 Pull out to mid-view of Rick and Glenn, visible from the knees up.

Other similar examples are:

Mid view of the father from the hips up. 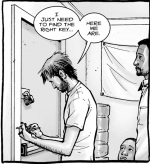 Mid view of Rick and Morgan from the waist up. 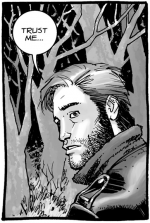 Pull into a close view of Rick, angled straight on over his shoulder, visible from the shoulder up. 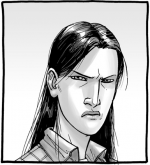 Pull into a close view of Lori, visible from the neck up. 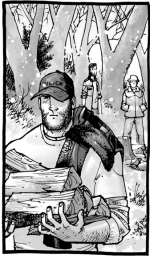 Full panel description:
Wide view, angled straight on to Shane.
He is in the foreground as he walks away from the men.
He is visible from the chest up as he carries an armload of chopped wood. His lips are drawn into a small straight line.
Rick and Dale stand in the same positions behind him; they are in the midground, visible in full staring at Shane as he walks away.

During particularly active or tense scenes, it is sometimes alright to exclude Figure Descriptions, as they can slow down the narrative.

A character’s face can be seen in full, in profile, in partial profile, or from behind . You should describe this as follows: 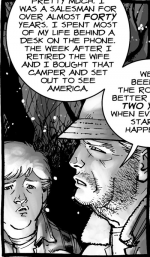 Close view of Dale from the side. He is visible in profile, with his face angled slightly upwards.
…
Donna, who sits beside Dale, stares at him with a concerned expression as he tells his story.

In the above description, it is not stated outright that Donna’s face is seen in full; this is because it is generally the default, so it does not often need to be stated, unless there is some reason it is necessary. Since we describe the expression on her face, it would be redundant to say that we can see her face.

To the left of the panel, Rick is in profile. He looks straight forward, his thick eyebrows furrowed with intent. 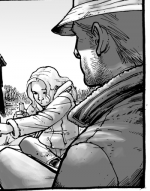 Dale is in partial profile wearing his fisherman’s cap, and a jacket with the collar popped.

In the two previous examples, more detailed descriptions of their figures and positions had been given elsewhere; here we are focusing on “profile” aspect.

This does not need to be done in every single instance, as with other types of descriptions first ask if it helps with narration. Remember that sometimes the artist chose to have parts of the character out of frame as part of the story, and sometimes it is not as necessary to convey the emotion or meaning of the panel. Use your judgement of the scene, and if in doubt ask for your editor’s input.

Examples of it in use: 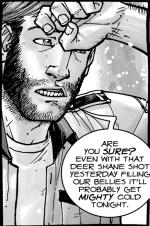 Rick, visible from the chest up, takes up most of the panel. One arm is out of frame. 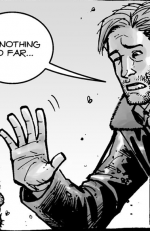 Rick leans into the frame from the right side.

His police duffle is just visible as it bleeds off frame.